it's been a bit

so i haven't posted in a lil' while and i thought i owed y'all an update.  I have just put in my second order with Herbalife which means I have been at this for about a month now.

Truth be told, I cheat.  I have been REALLY trying to be good and i gotta tell ya, when I am, i can tell a difference.  my problem is dinner.  i cook for three kids and one hungry man.  i try to find something that, if i take away most of the carbs, i can eat with them.

last night we had chicken quesadillas, beans and rice.  i skipped the rice and had some beans (about 1/2 cup) and 3/4 cup of chicken i did in the ol' crock pot.  i also put about an ounce of cheese on top of the chicken and had about 10 tortilla chips, which i used as a utensil to eat the chicken and beans.  i went online to log my dinner last night.  everything was going great, i was at the right amount of calories, until i added the damn chips.  now, granted, they weren't 10000 calories or anything but they did take my over my goal caloric intake.  lesson learned.  but DAMN those chips from Pancho Villa's are AMAZING!  especially with chicken and beans.

haven't weighed myself in days so i don't know what's up with that but clothes are not as tight and i feel good.

i have decided that weighing yourself is lame.  there are too many factors involved with getting an "accurate" number.  weigh yourself at the same time of day....take into account how much you think you clothes weigh (really?!?!  who has ever weighed a shirt and pair of pants?!?!?!?)...plus if i was working out or doing anything exercise related guess what?  muscle weighs more.  so that would throw it all off.

i think it's about how your clothes fit.  mine are still tight and lame.  so i am trying harder and working at it better.  my nutrition coach told me that she had a client that broke an ankle and was couch-bound.  the client, who didn't exercise, stayed on the strict food plan and lost weight.  shit, if she can do it laying down, i should be able to also!

that's all for today.  have a lovely week.
Posted by Brin Plourde at 11:47 AM No comments:

So my goal is to drink eight glasses of water a day.  Not 8 bottles of water, 8 cups of water; that's only four bottles of water.  So far, so good.  The only side effect is that I am peeing all the time.  Soo, I figured I needed my own stall in the bathroom.  I am there the most.  Here is what I envision when I think about it! 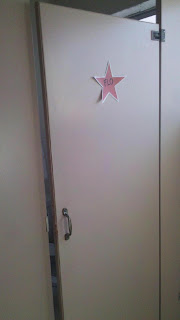 Granted it's not permanent...yet.  But in my mind, it is engraved in there. Queen of the Throne!
Posted by Brin Plourde at 12:22 PM 1 comment:

Back at work and feeling really good about the new year.
I realized a couple things.  I eat better when i am working.  i drink more water and stay on my schedule of eating better when i am at work.  vacation makes me eat shit, crap, junk at all hours of the day.  i have no schedule, no clock, etc.
So I can handle the weekends.  I just can't do a whole week and two weekends and stay focused and strong about eating right and enough.  I want to do projects, and clean and Etsy and all.  But I have learned that I will eat the closest thing to me when I wait too long and am hungry.  I need easy, high protein snacks ready to go at all times!
Given that fact, I have found my new snack and I am loving it.  Cooked chicken.  Yeah, that's all.  I used the crock pot over vacation and am hooked.
Easy Speasy Chicken
throw frozen chicken breasts into crock pot
one or two cans of cream of chicken soup mixed with water to make creamy
dump on top of chicken.  use water to fill the pot enough to cover the breasts (haha, i said breasts :)
turn on high for five or six hours.
drain sauce.
shread or cube chicken
put into tupperware in frig.
VIOLA!  Instant protein snack ready when you are!  No more searching the cabinets or frig.  Add to cottage cheese with pepper on top or Tapatio.  OY VEY!  It's good.
Posted by Brin Plourde at 4:50 PM No comments: